Dealing with Tantrums in children with Autism

Many children with autism engage in tantrums or negative behavior. These include crying, hitting their heads on the wall, biting, punching, and other kinds of behavior problems that leave parents confused, stressed, and feeling very helpless. Ms Hui Ling Loh, BCBA, Clinical Supervisor of ABC Center Singapore, talks about tips on managing these tantrums. One example she speaks of is Alice*, a 4 year old child, who used to bang her own head on the floor, kick and punch herself. Through the team’s work at ABC Center, Alice’s self-injurious behavior has now disappeared. 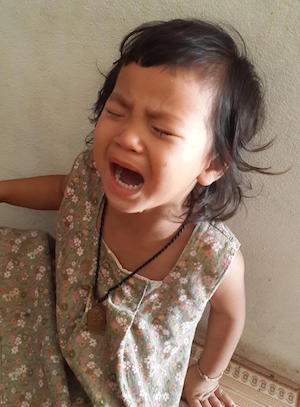 What causes tantrums and other behavior problems?

HLL: There are three main functions for behavior problems.

The first is to get access to something a child wants (a particular toy, for instance). The second is to escape from an unwanted activity/situation (for example, if its too noisy in a room, and the child wants to leave it). The third is to avoid a situation/activity that they don’t want (for example, if the child is being asked to do homework, but he wants to avoid it).

These functions are understandable. We adults also get upset whenever faced with similar situations, except we are better able to express ourselves and control our behavior.

Do you see these problems in many children with autism?

HLL: Yes, definitely. When David* started with us at ABC, he would throw tantrums whenever he wanted to play but he was made to wait (and finish his lessons instead).

Angie* would suddenly throw away all the learning materials off the table whenever she was tired. This was her way of getting a temporary escape from the demands of her lessons.

At ABC Center, we write a Behavior Intervention Program to reduce these problem behaviors over time. 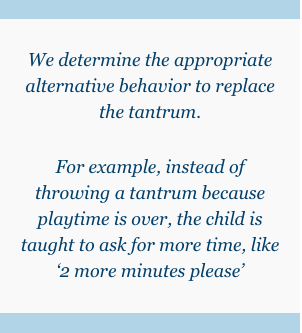 Once this is defined, we determine the appropriate alternative behavior to replace the tantrum, and we actively teach this. For example, instead of throwing a tantrum just because playtime is over, the child is taught to ask for more time, like ‘2 more minutes please’.

Lastly, our Behavior Intervention Plans ensure that all those taking care of a child — the teachers at the Center, parents and caregivers at home — respond in the same manner should the tantrum or problem behavior occur, so that the child learns over time that engaging in the tantrum will not get him or her the desired result (and only the appropriate behavior will).

How do you know that the Behavior Intervention Program is succeeding?

HLL: We actively take data over the weeks/months we are implementing the program. We analyze this to determine if the intervention is effective.

We have seen that the problem decreases once the Behavior Intervention Program is followed consistently by all who interact with the child. 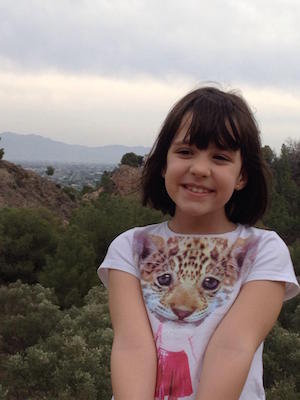 Alice* used to bang her head on the wall, hit herself with her own fists, kick the floor, pinch and scratch others — up to 200 times a month. After her intervention program, her pinching is down to just 3-4 times a month. Her self-injurious behavior (banging her own head, hitting herself) is now down to ZERO!

Have you had successes in reducing tantrums?

HLL: Definitely! One of our children at the center, Alice*, exhibited a lot of self- injurious behavior when she first enrolled with us.

She would bang her head on the floor, hit herself with her own fist, kick on the floor or furniture so hard that she would leave marks on her own legs just from her kicking. Beyond injuring herself, she would also injure other people by scratching and pinching. This would occur very frequently, more than 200 times a month!

We implemented a program that analyzed the function of her behavior and taught her the appropriate alternate behavior instead.

Our results show that 100% of children make progress.  The key is for the child to master the appropriate alternate behavior, otherwise the problem behavior will still happen.

Is it important for parents to get help if their special needs children are exhibiting problem behaviors?

HLL: Yes. All babies naturally scream and cry in order to communicate. Typically-developing children will eventually learn a more appropriate way to express their needs so the screaming and crying decreases on its own.

Also, as the child gets physically stronger, the harm that he can do to himself (and to others) can get worse. Hence, it is important to teach the child a more appropriate way to handle frustration by learning to communicate, before the behavior gets worse and harder to control. 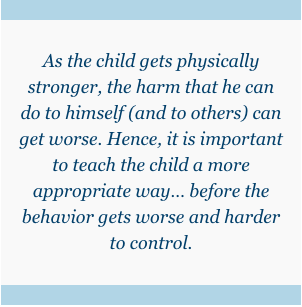 What if the child is too young to talk, or is non-verbal and cannot communicate?

HLL: There is always an appropriate way for a child to communicate. At ABC Center, we have several methods to help. For very young children, our Infant / Toddler Program specializes in enabling children to vocalize and request for what they want.

For non-verbal children, we teach the use of PECS (Picture Exchange Communication System). This allows them to express themselves through pictures. We also concurrently teach vocalization for children who have the ability to eventually learn to verbalize.

What would you advice parents do to help their children?

HLL: The most important thing is for the parents to quickly see a professional who can help create a Behavior Intervention Program.

Beyond this, parents can help by collecting data to see what the function of the behavior is and what triggers it. Then the parents, together with their Behavior Analysts, can identify and teach the appropriate alternate behavior for the child to replace the tantrum or negative behavior.

As prevention is the key to success, a prevention plan also needs to be in place. While we are teaching the appropriate alternate behavior, we also modify the child’s environment initially to minimize occurrence of the tantrums.

Lastly, to be successful, parents need to ensure cooperation from everyone interacting with the child, this means that everyone is consistent in approach so that the Behavior Intervention Program can fully be effective.

ABC CENTER SINGAPORE is part of the global network of Applied Behavior Consultants – a global entity that has been serving children with autism for over 25 years in 4 continents worldwide.   Our early intervention services include 1 on 1 ABA therapy, as well as our EarlyPreps group preschool program.