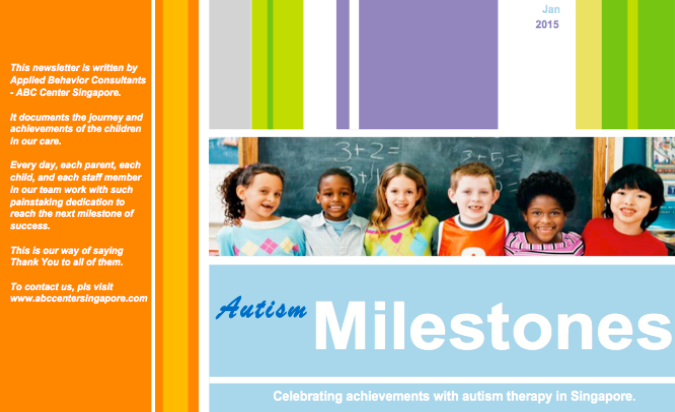 Socializing can be confusing for children with autism, particularly as they grow up, interacting with peers and developing friendships. They need to learn to hold conversations, to win (and lose) in games, to negotiate with others for what they want. These can make life tricky to navigate. We speak to Ms. Tanti Hardjolukito, BCBA, one of ABC Center Singapore’s Behavior Analysts regarding her work with Michael*, a 9 year old with Asperger’s Syndrome who she works with at ABC Center under its Social Skills Program.

What program do you have to teach social skills to children like Michael?
Tanti: At ABC Center, we have a specialized Social Skills Program. Michael has been with us in this program for the past two years since he was 7 years old. 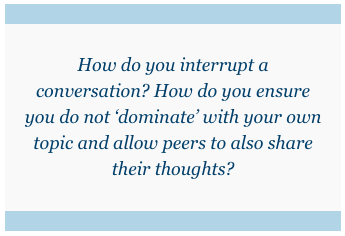 What kind of social skills do you teach?
Tanti: It depends on the age, skill level, and the needs of the child. For Michael, one of our focus areas was holding conversation with friends. When he started, Michael tended to only talk about things he was interested in. He was almost ‘obsessive’ about these things, to the point that many of his peers would lose interest in talking to him.

Teaching a child how to hold conversations must be very difficult? There is no ‘formula’ to a conversation, right?
Tanti: There is no formula, but there are ways to help a child understand the nuances. One of the basics in conversation is body language. We teach the child to turn his body and face his friends when talking. We teach him to keep eye contact, to sit or stand appropriately.

We even teach when it is polite to interrupt a conversation. How do you interrupt? How do you ensure you do not ‘dominate’ with your own topic, and allow peers to also share their thoughts? When Michael started with us, it was very difficult for him to tolerate ‘non-reinforcing conversations’.

What do you mean by ‘non-reinforcing’ conversations?
Tanti: (Laughs) Sorry, in ordinary language, conversations on topics that are not interesting to him.

Tanti: We teach him to still remain engaged to be polite. He learns to ask questions and make comments to create engagement, rather than just ignoring his friend or insisting on his own topic.

We have a methodical process for this. First we do structured learning – we watch videos of people having conversations, then we explain to him what happened in the video. Then he has to identify and explain some aspects of interrupting conversations in other videos. Then we do role playing, and then live practice with role model peers or adults.

Through this, he learns the different ‘cues’ — i.e., it is his turn to talk when there is a slight pause at the end of a sentence, or when there is an upward tone of voice when a question is directed at him. At the same time, he also learns to give the same cues to his friend so that the conversation flows.

When we started with Michael, we had a ball (or other props) that we passed back and forth between him and his peer — whoever had the ball had his turn to talk. Eventually, as Michael learned to read more natural cues, we faded the ball out and we now no longer need to use it. 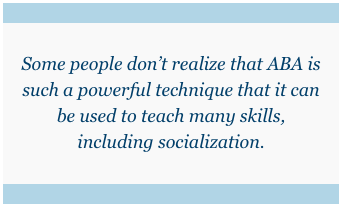 As a global Board Certified Behavior Analyst, I suppose you use Applied Behavior Analysis (ABA) to teach Social Skills in this program?
Tanti: For sure! Some people don’t realize how ABA is such a powerful technique that it can be used to teach many skills, including socialization. It is just a matter of applying ABA correctly to harness its power.   At ABC Center Singapore, our results show that 100% of children make progress.

We used ABA to teach Michael all the skills we just talked about. We collected data meticulously to see how much he has learned and when it was time to move to the next level. We focused on positively rewarding him for a job well done. 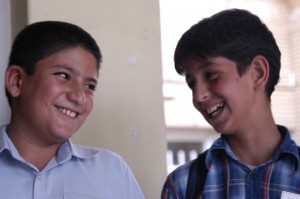 Can you describe in more detail how this is done?
Tanti: When we taught Michael how to properly interrupt a conversation, we first had discussions on why we interrupt – how urgent is the need? Can it wait? If mom is talking on the phone and he wants to ask for ice cream, is it proper to interrupt, or should he wait until mom’s phone conversation is over?

After he understood which reasons and timing are proper for interruption, then Michael learned how to interrupt a conversation — by tapping a friend lightly on the shoulder, or first making eye contact with the person (to confirm that he or she is ready to attend to Michael), rather than just blurting out his thoughts, for example.

This requires a lot of practice, right?
Tanti: Yes it does, with both the behavior therapist and with a peer role model. Michael had sessions with a typical peer who is 11 years old. He was close enough to Michael in age, so he was great at showcasing the proper way of doing things. We even videotaped Michael’s live practice sessions, so that he himself could watch it. Then we discussed what else he needed to improve.

Another socialization aspect you mentioned is learning how to lose in games. Losing a game can make many typical kids (and even adults) upset! How do you teach this?

Tanti: Getting upset or disappointed is a very normal reaction when you lose a game. However, Michael used to have big tantrums and outbursts when he was upset — either because he lost a game, or because he was being teased by a friend. He would cry and become very emotional that it became hard to talk and reason with him.

We had various methods of helping him. In one of our lessons, we used an ‘emotional thermometer’ to help him appropriately recognize how he was feeling – blue (not angry), yellow (slightly upset), orange (angry) red (very angry). Whenever situations arise, he began to recognize which ‘color’ he was feeling.

After he recognized this, we helped him identify where he needed to be emotionally and helped him learn how to calm himself down to move from ‘red’ back to ‘blue’. With facilitation, he was able to tell us what he was feeling and tell us what he needed to do to help him calm down (e.g., play a game on the IPhone). When Michael calmed down successfully on his own, he gained access to the IPhone Game for a short period of time.

This ability to regulate his own emotion is very important for him to relate with other children. 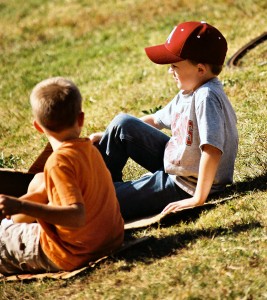 Do you see good progress?
Tanti: Yes, he has gotten much better. While he would still get upset sometimes when losing, the depth of the emotion, as well as the length of time he is upset is now much more in line with what we expect of typical children.

What are the biggest areas where Michael has improved?
Tanti: He is tolerating things more. He is not as impulsive. He doesn’t perseverate anymore when he doesn’t get what he wants immediately. He is okay even if you say ‘I can’t give it to you now, but I can give it to you in 30 minutes.’ He is also more helpful towards his younger brother.

In school, his teachers have said he is now more responsive towards his peers. The school likes the change they have seen and encourages ABC Center to continue with Michael’s social skills training.

His parents have said that he now asks for play dates with his friends. This is a big plus as this now shows he has learned to enjoy social interaction.

Is the work with Michael all finished? Or are there still things you want to work on?
Tanti: Despite his great progress, there are still things we want to work on. He still needs to be more comfortable and participative when interacting with a group. He has to use and generalize the skills he has learned to a larger group of people. But the trajectory he is on is very good so we are happy with the progress.

What advice would you give to those who care for Michael, or other children like him?
Tanti: Keep giving opportunities for interaction. Bring friends over. Bring them to relatives’ houses. Michael, in particular, has a lot of potential. Make him feel successful. Whenever he feels successful, he is willing to try more things. This positive cycle has been a big driver of his success.

His parents and those who take care of him have done a great job positively supporting him. They should continue on this positive mindset as this will keep Michael on a good journey.

ABC CENTER SINGAPORE is part of the global network of Applied Behavior Consultants – a global entity that has been serving children with autism for over 25 years in 4 continents worldwide.   Our early intervention services include 1 on 1 ABA therapy  , Infant/Toddler 1on1 ABA Program, well as our EarlyPreps group preschool program.

*Child’s name and all photos are altered for confidentiality.