Learning to Talk: Breaking down the barriers 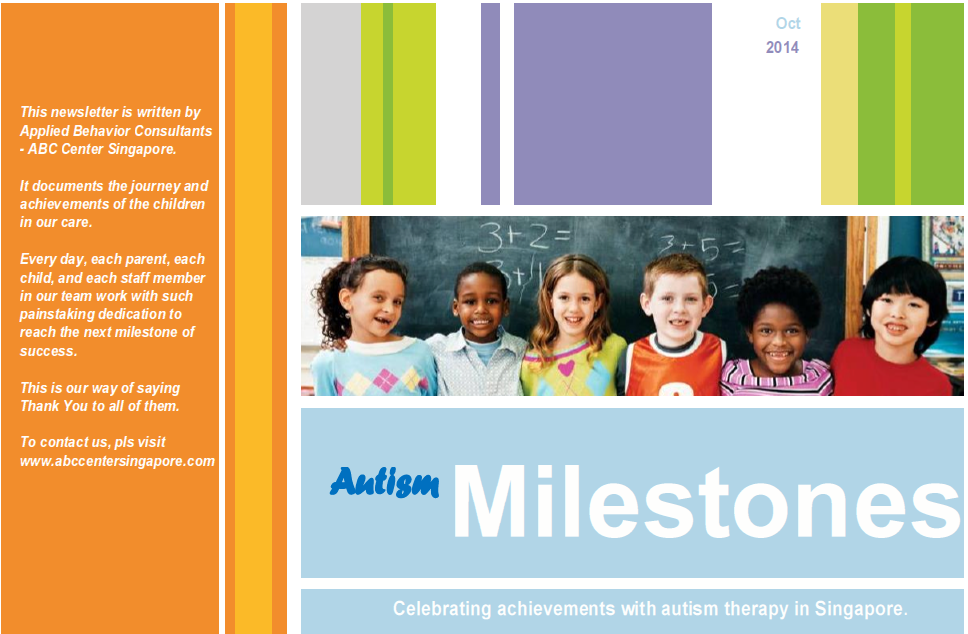 One of the most heartbreaking aspects of autism is the inability of some children to talk. When Spencer* signed up with ABC Center Singapore three years ago, he was in this situation. He was already 22 months old, an age when many of his typical peers would be speaking short but clear sentences. Unfortunately, Spencer could not do this. He could make sounds but they were unintelligible, he could not use them to communicate. Nor could he understand what was being said to him. Today, three years later, Spencer has significantly progressed. He can now talk to us, and we to him.

Spencer started babbling at 10 months. At 16 months, he was still just making unintelligible sounds without words. He did not appear to make any effort to differentiate sounds to refer to different things. His babbling did not seem linked with any desire to communicate. They sounded like random sounds, according to Mrs. P, Spencer’s mom. “Also,” she adds, “I could just tell by the look on his face that he had no understanding of what I was saying to him. I could tell by his eyes, there was no acknowledgement, no realization of anything. Do you know what I mean?”

I knew what she meant because I saw Spencer when he first joined ABC. He was a beautiful bright-eyed boy, but he did not look at me, nor did he talk. Every few seconds, he would tilt his head backwards (like a reverse nod). This was his form of self-stimulatory behavior. 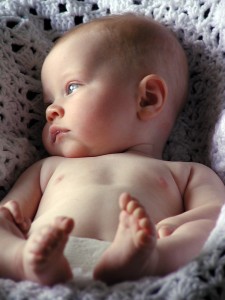 How did he communicate what he wanted?

I asked Mrs. P. “Well, I guess, he didn’t really. I just made everything available for him. He had a routine. He ate on schedule, slept on schedule, changed diapers on schedule. We made sure he had his favourite toys around him. I guess we made him a comfortable world that he didn’t actually need to talk,” she says.

Mrs. P. was worried that there was something wrong. The warning signs were obvious to her. However, her paediatricians said everything was fine and not to worry. Spencer was still young and each child develops at his own pace, they said. Even as she pointed out all the red flags (lack of talking, being behind in many of the usual milestones, head nodding, big tantrums), she felt the paediatricians were not taking the issue seriously.

Spencer reached his 16th month still significantly behind many milestones, so Mrs P finally took him to a developmental paediatrician. This paediatrician, while not giving a formal diagnosis for Spencer, acknowledged all the red flags and suggested action steps and therapy.

Mrs P took things into her own hands and did her research on what needed to be done next. She knew he needed speech therapy and she tried to find a good speech therapist. “The first one we found worked with Spencer for 6 months, but there was very little progress, we had to change and look for another one,” she recalls.

Beyond speech therapy, she had also heard of ABA (Applied Behavior Analysis). She knew it was the most proven and most researched method, and for her, it was just a matter of finding the right people who would give good ABA.

A friend of hers had a son at ABC Center Singapore (eventually, this friend’s son was the very first graduate of ABC Singapore and had successfully gone on to mainstream school). With this recommendation, she chose ABC Center.

“I am not just going to drop him off and pick him up.”

It was clear to Mrs. P that she should be actively involved in Spencer’s therapy. “When I first came to ABC, I told Hui Ling (Ms Hui Ling Loh, MA, BCBA, Clinical Site Administrator) that I would be asking her a million questions… and I did,” she says. “I give Hui Ling a lot of credit because she always made time for me. She was always there to explain what was going on, and what we were going to do next.” Mrs P also ensured that all those working with Spencer — we at ABC Center, his speech therapist, his occupational therapist – all had clarity on what was going on as a team. “When one writes a report, everyone in the team sees it. I was facilitating this,” she states. I was very impressed with Mrs. P’s attitude. It was clearly helping to ensure Spencer gets the most coordinated care.

One of the first things ABC Center worked on was for Spencer to communicate in a simple way, non-verbally at first. We worked on responding and establishing eye contact when his name was called. We worked on vocal imitation, as well as identifying objects which enabled him to answer questions through pointing and gesturing. We worked on following instructions in simple interactive games (imitating play actions with toys and building blocks) and simple tasks (like washing hands). This was done concurrently with teaching him PECS (Picture Exchange Communication System) so that he could begin to communicate through pictures.

Eventually, Spencer began to realize that he can communicate with other people to get his needs met (‘I want milk’ or ‘I want to play’). With these small breakthroughs, Spencer’s frustrations and tantrums gradually disappeared. Mrs. P mentions that when Spencer was using PECS, she made her own mini-PECS book for use at home to ensure consistency in approach. 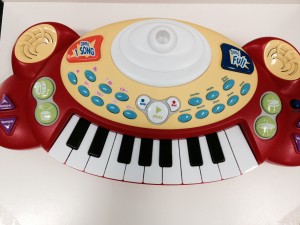 Spencer also had verbal apraxia, Mrs. P says. (Verbal apraxia is a motor speech disorder that involves difficulty in moving the physical body parts, like the lips, jaw, tongue, needed for speech.) Hence, he needed a specialist speech therapist to work with him, she explains. “Can you believe?” she continues, “At one point, we realized we had never seen Spencer’s tongue when he made his sounds.” This specialist worked on the physical aspects of speech to help Spencer vocalize. This required many hours of therapy that Spencer had to sit through.

ABC Center helped enable this by teaching him the right behavior conducive for learning. 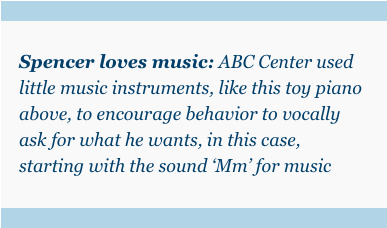 He learned to listen and follow instructions, to sit quietly at the table, to wait for his turn. These created the conditions for him to learn and progress faster.

We also worked on behavior to strongly encourage vocal communication. Since Spencer liked music very much, I recall one of his lessons was to ask for music (starting with saying the ‘Mm’ sound for the word ‘music’). Every time he successfully said ‘Mm’, he would get to hear his favourite song. It was a lot of hard work for Spencer, and for the therapists involved, but extremely rewarding. We could see Spencer get better and better every day. He began to realize that if he made a certain sound (in this case, ‘Mm’), people would understand what he wanted (music), and he would get his needs met.

We had clear data on each lesson everyday, it showed his success rate for every aspect. Based on this, we had a methodical approach on how to progress his lessons to more functional sounds, and eventually words and sentences. This ABA approach, which ABC uses, has over fifty years of clinical research proving its effectiveness. In line with this clinical data, we at ABC Center also see that all children are able to communicate their wants and needs within a year.

“I remember one of his first words was ‘Up’,” says Mrs. P, “I don’t remember his first sentence though.” I interjected and told her I remember the first sentence he said here at ABC. The staff had bubble play as part of his lesson, and one day he finally said, ‘I want bubble’. Upon hearing this, all the staff cheered and congratulated Spencer. It was a big emotional moment. Everyone had worked so hard to get him to say words, and finally he said a full sentence! There was a mad rush for the iphone to videotape the moment so we could show this great progress to his parents, I told her. 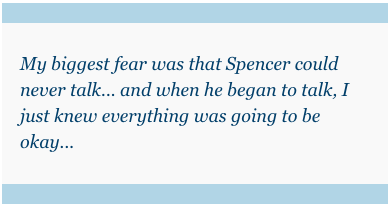 I ask Mrs P how she felt when these breakthroughs happened. “I just kept crying,” she said. “My biggest fear was that Spencer could never talk. And when he began to talk, I just knew everything was going to be okay.” 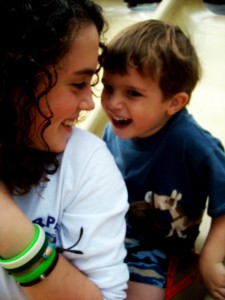 Today, Spencer talks. He greets people he knows spontaneously. I have been a recipient of many of his charming hellos). He responds to questions – from the more basic yes/no questions, to the more complex (where are you going? what will you do there?). More importantly, he is able to tell you what he wants and what he doesn’t want.

“He now tells me what he wants to wear!” Mrs. P says. He comments on the things around him. This has had a huge impact on his behavior. “Before he was able to talk, I used to walk around with bite marks all over my arms from his tantrums. There was just so much frustration in him. But now, even if he sometimes still struggles a little bit, he gets to say what he needs. The big massive tantrums are very rare nowadays. The frustration coming from the inability to talk has gone away.” Beyond that, he has even learned to negotiate, (‘I want more time’) and can sometimes get upset when he doesn’t get what he wants, just like other typical kids his age.

Spencer continues to go for ABA therapy, together with speech and occupational therapy. 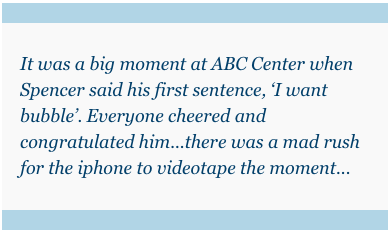 “He also does music, too… he has perfect pitch and perfect tone, by the way,” Mrs. P adds. Some of his language is still not functional, so we are continuing to work on this. Mrs. P adds that we still have to work on getting him to stop talking sometimes. There is clearly still more to be done.

But Mrs P continues, “There is such a huge change in a child when he gets the power of language. It’s like, ‘if I can talk, the world is my oyster’. There are no words to describe how I feel. I can’t begin to imagine what he would be like if he hadn’t started here.”

Yesterday, I bumped into Spencer, and I asked him, “Hi, Spencer! How are you?” and he answered “Good”.
He’s right. He is good.

*all names and pictures are altered for confidentiality